We inspire, inform and prepare leaders to take the right actions in the age of extremes. We do this through writing, individual coaching, training groups, facilitating workshops and keynotes at public and in-house conferences.

Our approach is analytical creativity, combining head and heart, challenging established thinking patterns and beliefs, expanding the boundaries of knowledge and vision. We provide expertly curated up-to-the-minute research on the science of megatrends beyond hypes and hysteria in bite-sized, easily digestible language and formats.

Everything we do is meant to inform and enable action since in the end what counts is not only seeing the future but turning bold ideas into hands-on solutions and thereby creating it. What counts is riding the wave of change gracefully, skillfully – and: responsibly.

The vision, aspiration and inspiration for the Megatrends Academy is to become a global platform with leading contributors who train, speak and write about the entire spectrum of megatrends and their strategic implications, all by 2025. A thriving community contributing to creating a world worth living in for generations to come.

Background – Why the Megatrends Academy?

The major changes we are facing over the next years and decades hold enormous promise and opportunity. At the same time, they also pose the biggest challenges humanity has ever faced.

To name just a few:

We have to decouple wealth creation from use of fossil fuels. We have to overcome resource scarcities in a dimension we have never seen before. The number of weather catastrophes has increased exponentially since 1980. Global average temperature is rising at an unprecedented rate and has the potential to raise the sea level by 5-10 meters by the end of the century. Just imagine Mumbai, Amsterdam, Shanghai, Miami, Santo Domingo, Panama City, Bangkok, Washington D.C., Taipei, Jakarta and Rome partially drowned.

The major changes we will be facing over the next years and decades hold enormous promise and opportunity. At the same time, they also pose the biggest challenges humanity has ever tackled.

To name just a few:

We have to decouple wealth creation from the use of fossil fuels. We have to overcome resource scarcities in a dimension we have never seen before. The number of weather catastrophes has increased exponentially since 1980. The average global temperature is rising at an unprecedented rate and has the potential to raise the sea level by 5-10 meters by the end of the century. Just imagine Mumbai, Amsterdam, Shanghai, Miami, Santo Domingo, Panama City, Bangkok, Washington D.C., Taipei, Jakarta and Rome partially drowned…

The average person today is ten times richer than in 1800. At the same time countries and individuals are more indebted than they have ever been in human history. Are we happier? Beyond a relatively low threshold, economic wealth is not a driver of human happiness. But we live as if this is not the case and there is nothing more important than consumption and accumulation.

Artificial intelligence holds enormous promise to help cope with these challenges. The convergence of synthetic biology, engineering and nanotechnology, as well as new sensors and ever smaller chips, are catapulting healthcare into a new age. 2.5 billion people entering the middle class and moving to cities will create an enormous demand for goods – and an equally enormous drain on already quite depleted resources. Did you know that we are likely to run out of gold, silver, nickel and lead within the next 20 years?

In addition, we might soon be in the position to engineer the climate through interventions in the stratosphere and, for the first time in history, not only change life, but create it. But, if done wrong, all these inventions have the potential to destroy life on planet Earth too.

Coping with the challenges and binding the Prometheus-es that we are setting loose requires a form and intensity of global cooperation that will make the nuclear non-proliferation treaties seem like a piece of cake. Unfortunately, right now it seems as if we are rather headed in the opposite direction: an AI arms race between the USA, China and Russia, newly sparked nationalism, protectionism and ‘allergic reactions’ to migration flows dominate the headlines.

To address these challenges and reap the benefits of the opportunities, we have to fundamentally change the way we educate our children, develop our leaders, design our institutions and organizations, manage our workplaces, and collaborate across nations and regions. We have to challenge deeply ingrained habits, customs, values and belief systems.

This is what this site is about: how to understand what is going on in the grand scheme of things, how to see the opportunities in it, how to cope with the risks and uncertainties, and how to see the implications this has for organizations and their leaders, nations and the global community.

As my first grandchildren are about to be born, I also have an intensified feeling of responsibility to future generations and towards creation as a whole. At the end of the day, we have only borrowed this place from our children and their children – how do we want to leave it behind? What is the legacy that we want to leave as a human race? How much of the planet, its beauty and resources, should be left for our great-grandchildren? 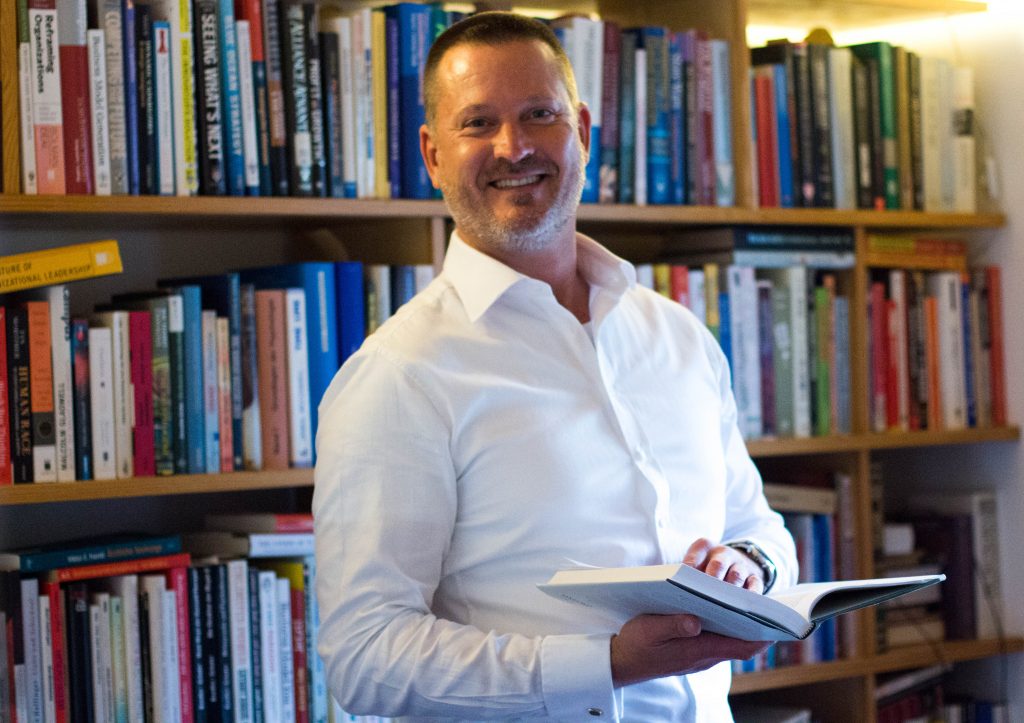 My PhD was originally in economics, but over the last 20 years I was drawn more and more towards the themes Megatrends and Leadership. During the last 5 years I increasingly dived into the world of Artificial Intelligence as probably the biggest driver of value creation to come and the biggest risk to humanity too. These themes are where my passion is.

I used to be a Professor at the University of Liverpool, Executive Vice President at EBS University, Vice Dean Education at European Business School, Managing Director at Goethe Business School and a strategy consultant. I am also on the MBA Advisory Board of the Mays Business School, Texas A&M, and work for EPAS as an accreditor.

I thrive in embracing paradoxes and building bridges between different worlds, mind-sets and cultures. I gain strength from the stretch, from being at home in many places, many themes. Developing an idea and then bringing it to life, creating a new piece of reality that had not existed before excites me. Bridging worlds, bringing together realms that where hitherto unrelated, enthuses me. Bridging disciplines, concepts and cultures is in my blood. I did this in my academic work, and I did this in my private life. Despite being brought up in a classic German setting this early on felt too small, too square, too limited. Over the last 30 years I have taught at Tongji University, a leading Chinese University, did a project for the World Bank in Indonesia, lived in a Cuban slum, travelled to more than 40 countries worldwide, backpacked half a year in India and three months in Africa, and worked in the UK and Germany. I am married to an American and we live in Spain.

I am at home in all these places; I am at home in the space in between these places. Like the silence between the notes makes the music, the connection between the places make the symphony of my life. I am the line between the dots, not the dots. The same I do at the Megatrends Academy: I love working on and at the interplay of economic, sociological, psychological, political, and technological forces that determine our future. Once more it is connecting the dots, it is the lines between the dots, where I am at home. My fascination for the topic of Megatrends goes back a long time: The first time I got in touch with the theme of Megatrends was when my father was reading John Naisbitts ‘Megatrends’ (the book that basically defined the term) and Alvin Toflers ‘Future Shock’.  It must have been sometime in the late 80s and I was probably in the army at this time, I don’t remember that exactly. I quickly got deeply absorbed, albeit in all likelihood I did not grasp the full extent of what they were writing. But I was hooked.

A few years later, it was the early nineties, when studying economics and living in London, I came across Charles Handy’s ‘The age of unreason’ in a second-hand book store. I was fascinated by his approach to combine technological, sociological, psychological, economic and strategic insights and derive from his understanding of their interplay the implications for businesses, institutions, organizations, and society as a whole. I knew this is what I wanted to do. This is where my intellectual home was: between the worlds, connecting the dots, crossing cultures and disciplines. At the end of the 90s I then made the acquaintance with Michio Kaku’s ‘Visions: How science will revolutionize the 21st century’, and 10 years later with William E. Halal’s ‘Technology’s promise’.

In 2014 I started being interested in artificial intelligence and included the topic in my speeches about Megatrends at conferences which was, at the time, still quite unusual. Just imagine when the seminal book ‘No ordinary disruption’ of three McKinsey authors was published in 2015 they deemed AI not even worth devoting a chapter too. Some conference participants at that time must have been thinking that I was smoking pot or watched too many Sci-Fi movies. Just five years later AI dominates the headlines and nothing else seems to matter which, of course, is equally wrong. I have devoted a substantial portion of the last two years developing my workshop on making business sense of AI. It brings together my knowledge of megatrends, my experience in building and leading businesses and my perspective as a strategist and economist.

In the last 20 years I have read some 300.000 pages on related topics ranging from philosophy, psychology, economics, politics, strategy, technology, science and business. This all is the basis now for how and what I teach and consult on in the context of the Megatrends Academy.